Marian Quotes and Quotations on the Blessed Virgin Mary 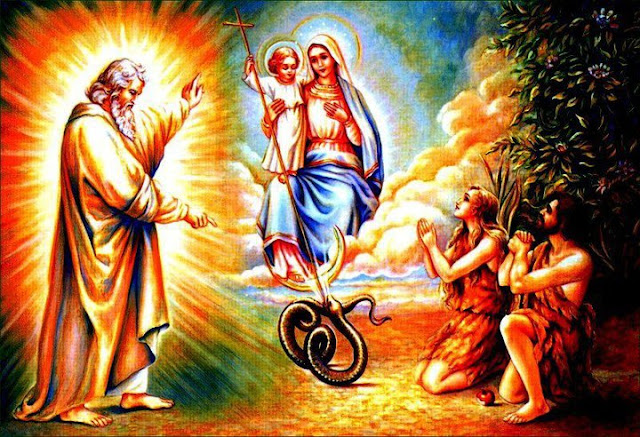 This is a collection of some notable quotes from Catholic Theologians and Saints as well as from some notable Protestant Theologians and Preachers. Some quotes on Mary from the Sacred Scriptures are also included. This is to demonstrate how some of the Roman Catholic beliefs and sayings on the Blessed Virgin Mary is held by some influential non-Catholics Theologians and also grounded in the Word of God.

Quotes by Mary herself from Scriptures:

And Mary said: Behold the handmaid of the Lord: be it done to me according to thy word. And the angel departed from her. (Luke 1:38 DRB)

And Mary said: My soul doth magnify the Lord. And my spirit hath rejoiced in God my Saviour. Because he hath regarded the humility of his handmaid: for behold from henceforth all generations shall call me blessed. Because he that is mighty hath done great things to me: and holy is his name. And his mercy is from generation unto generations, to them that fear him. He hath shewed might in his arm: he hath scattered the proud in the conceit of their heart. He hath put down the mighty from their seat and hath exalted the humble. He hath filled the hungry with good things: and the rich he hath sent empty away. He hath received Israel his servant, being mindful of his mercy. As he spoke to our fathers: to Abraham and to his seed for ever. (Luke 1:46-55 DRB)

And the third day, there was a marriage in Cana of Galilee: and the mother of Jesus was there. And Jesus also was invited, and his disciples, to the marriage. And the wine failing, the mother of Jesus saith to him: They have no wine. And Jesus saith to her: Woman, what is that to me and to thee? My hour is not yet come. His mother saith to the waiters: Whatsoever he shall say to you, do ye. (John 2:1-5 DRB)

Quotes on Mary from Scriptures:

And in the sixth month, the angel Gabriel was sent from God into a city of Galilee, called Nazareth, To a virgin espoused to a man whose name was Joseph, of the house of David: and the virgin’s name was Mary. And the angel being come in, said unto her: Hail, full of grace, the Lord is with thee: blessed art thou among women. (Luke 1:26-28 DRB)

And the angel said to her: Fear not, Mary, for thou hast found grace with God. (Luke 1:30 DRB)

Now the generation of Christ was in this wise. When as his mother Mary was espoused to Joseph, before they came together, she was found with child, of the Holy Ghost. Whereupon Joseph her husband, being a just man, and not willing publicly to expose her, was minded to put her away privately. But while he thought on these things, behold the Angel of the Lord appeared to him in his sleep, saying: Joseph, son of David, fear not to take unto thee Mary thy wife, for that which is conceived in her, is of the Holy Ghost. And she shall bring forth a son: and thou shalt call his name Jesus. For he shall save his people from their sins. Now all this was done that it might be fulfilled which the Lord spoke by the prophet, saying: Behold a virgin shall be with child, and bring forth a son, and they shall call his name Emmanuel, which being interpreted is, God with us. (Matthew 1:18-23 DRB)

And it came to pass that when Elizabeth heard the salutation of Mary, the infant leaped in her womb. And Elizabeth was filled with the Holy Ghost. And she cried out with a loud voice and said: Blessed art thou among women and blessed is the fruit of thy womb. And whence is this to me that the mother of my Lord should come to me? For behold as soon as the voice of thy salutation sounded in my ears, the infant in my womb leaped for joy. And blessed art thou that hast believed, because those things shall be accomplished that were spoken to thee by the Lord. (Luke 1:41-45 DRB)

And they came with haste: and they found Mary and Joseph, and the infant lying in the manger. And seeing, they understood of the word that had been spoken to them concerning this child. And all that heard wondered: and at those things that were told them by the shepherds. But Mary kept all these words, pondering them in her heart. (Luke 2:16-19 DRB)

And when they were come in, they went up into an upper room, where abode Peter and John, James and Andrew, Philip and Thomas, Bartholomew and Matthew, James of Alpheus and Simon Zelotes and Jude the brother of James. All these were persevering with one mind in prayer with the women, and Mary the mother of Jesus, and with his brethren. (Acts 1:13-14 DRB)

And a great sign appeared in heaven: A woman clothed with the sun, and the moon under her feet, and on her head a crown of twelve stars. And being with child, she cried travailing in birth: and was in pain to be delivered. (Revelation 12:1-2 DRB)

Quotes on Mary from Catholic Theologians and Saints:

Never be afraid of loving the Blessed Virgin too much. You can never love her more than Jesus did and If anyone does not wish to have Mary Immaculate for his mother, he will not have Christ for his brother. ~St. Maximilian Kolbe

Such is the will of God that we should have everything through Mary. ~St. Alphonsus Liguori

Mary is the lily in God’s garden. ~Saint Bridget of Sweden

No man is delivered or preserved from the world-wide snares of Satan save through Mary; and God grants His graces to no one except through her alone. ~Saint Germanus

Let, then, the life of Mary be as it were virginity itself, set forth in a likeness, from which, as from a mirror, the appearance of chastity and the form of virtue is reflected. From this you may take your pattern of life, showing, as an example, the clear rules of virtue: what you have to correct, to effect, and to hold fast. The first thing which kindles ardour in learning is the greatness of the teacher. What is greater than the Mother of God? ~Saint Ambrose

But the power of Mary over all the devils will especially shine forth in the latter times, when Satan will lay his snares against her heel: that is to say, her humble slaves and her poor children, whom she will raise up to make war against him. They shall be little and poor in the world’s esteem, and abased before all like the heel, trodden underfoot and persecuted as the heel is by the other members of the body. But in return for this they shall be rich in the grace of God, which Mary shall distribute to them abundantly. They shall be great and exalted before God in sanctity, superior to all other creatures by their lively zeal, and so well sustained with God’s assistance that, with the humility of their heel, in union with Mary, they shall crush the head of the devil and cause Jesus Christ to triumph. ~Saint Louis de Montfort (True Devotion to Mary)

Mary was raised to the dignity of Mother of God rather for sinners than for the just, since Jesus Christ declares that he came to call not the just, but sinners. ~St. Anselm

Quotes on Mary from Protestant Theologians/Preachers:

Even when Jesus was dying on the cross he was thinking about his mother! ~Billy Graham (“Hour of Decision” radio broadcast Dec. 2006 CHRI Radio)

St. Paul says ‘God sent his Son born of a woman, These words which I hold for true, really sustain quite firmly that Mary is the Mother of God. ~Martin Luther (Martin Luther’s Works, vol 7, page 592)

A new lie about me is being circulated. I am supposed to have preached and written that Mary, the mother of God, was not a virgin either before or after the birth of Christ, but that she conceived Christ through Joseph, and had more children after that. ~Martin Luther (That Jesus Christ Was Born a Jew, 1523, LW, Vol. 45, page199)

‘In Mary everything is extraordinary and all the more glorious as it has sprung from pure faith and burning love of God.’ She is ‘the most unique and the noblest member’ of the Christian community . . . ~Heinrich Bullinger {In Hilda Graef, Mary: A history of Doctrine and Devotion, combined ed. of vols. 1 & 2, London: Sheed & Ward, 1965, vol.2, pages.14-5}

The Blessed Virgin Mary, who, as well after as when she brought him forth, continued a pure and unspotted virgin. ~John Wesley {“Letter to a Roman Catholic” / In This Rock, Nov. 1990, page 25}

“If you are what you should be, you will set the whole world on fire!” St. Catherine of…
Read More

Every second someone somewhere dies

Every second someone somewhere dies. PLEASE VALUE EVERY MOMENT OF YOUR LIFE. Imagine the clock ticking and every…
Read More

10 Quotes on Rest and Relaxation

Human health requires relaxation. Here are some good quotes on rest and relaxation. It is requisite for the…
Read More

Loss of a Loved One Quotes

While we are mourning the loss of our friend, others are rejoicing to meet him behind the veil.…
Read More

Be careful of the words you say, Keep them short and sweet. You never know, from day to…
Read More

Happiness depends upon ourselves. ~Aristotle Quotes Courage is the first of human qualities because it is the quality…
Read More
wpDiscuz
0
0
Would love your thoughts, please comment.x
()
x
| Reply