No More TV Quotes and Sayings – Kill Your Television 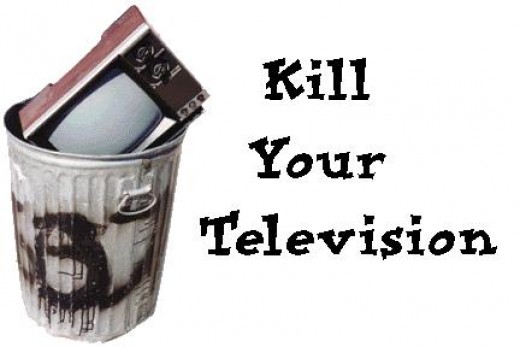 Why turn OFF your Television?

The media can wreak great harm on the family when it offers an inadequate or even distorted vision of life, of the family itself and of religion and morality. ~Pope John Paul II

I wish there was a knob on the TV so you could turn up the intelligence. They got one marked “brightness” but it don’t work, does it? ~Leo Anthony Gallagher

If you came and you found a strange man… teaching your kids to punch each other, or trying to sell them all kinds of products, you’d kick him right out of the house, but here you are; you come in and the TV is on, and you don’t think twice about it. ~Jerome Singer

I could have been a doctor, but there were too many good shows on TV. ~Jason Love

In Beverley Hills, they don’t throw their garbage away – they make it into television shows. ~Woody Allen

The triumph of machine over people. ~Fred Allen, about television

A few months before I was born, my dad met a stranger who was new to our small Tennessee town. From the beginning, Dad was fascinated with this enchanting newcomer, and soon invited him to live with our family. The stranger was quickly accepted and was around to welcome me into the world a few months later. As I grew up I never questioned his place in our family. Mom taught me to love the Word of God. Dad taught me to obey it. But the stranger was our storyteller. He could weave the most fascinating tales. Adventures, mysteries and comedies were daily conversations. He could hold our whole family spellbound for hours each evening. He was like a friend to the whole family. He took Dad, Bill and me to our first major league baseball game. He was always encouraging us to see the movies and he even made arrangements to introduce us to several movie stars. The stranger was an incessant talker. Dad didn’t seem to mind, but sometimes Mom would quietly get up – while the rest of us were enthralled with one of his stories of faraway places – and go to her room read her Bible and pray. I wonder now if she ever prayed that the stranger would leave. You see, my dad ruled our household with certain moral convictions. But this stranger never felt an obligation to honor them. Profanity, for example, was not allowed in our house – not from us, from our friends, or adults. Our longtime visitor, however, used occasional four-letter words that burned my ears and made Dad squirm. To my knowledge the stranger was never confronted. My dad was a teetotaler who didn’t permit alcohol in his home – not even for cooking. But the stranger felt he needed exposure and enlightened us to other ways of life. He offered us beer and other alcoholic beverages often. He made cigarettes look tasty, cigars manly, and pipes distinguished. He talked freely (too much too freely) about sex. His comments were sometimes blatant, sometimes suggestive, and generally embarrassing. I know now that my early concepts of the man/woman relationship were influenced by the stranger. As I look back, I believe it was the grace of God that the stranger did not influence us more. Time after time he opposed the values of my parents. Yet he was seldom rebuked and never asked to leave. More than thirty years have passed since the stranger moved in with the young family on Morningside Drive. But if I were to walk into my parents’ den today, you would still see him sitting over in a corner, waiting for someone to listen to him talk and watch him draw his pictures. His name? We always called him TV.

American children and adolescents spend 22 to 28 hours per week viewing television, more than any other activity except sleeping. By the age of 70 they will have spent 7 to 10 years of their lives watching TV. ~The Kaiser Family Foundation

The TV is my shepherd I shall not want,
It makes me to lie down on the sofa.
It leads me away from the faith,
It destroys my soul.
It leads me to the path of sex and violence for the advertiser’s sake.
Even though I walk in the shadow of Christian responsibilities,
There will be no interruption, for the TV is with me.
Its cable and remote control, they comfort me
It prepares a commercial for me in the midst of my worldliness
And anoints my head with secular humanism and consumerism.
My covetousness runs over;
Surely ignorance and laziness shall follow me all the days of my life,
And I shall dwell in the house of wretchedness watching TV forever.

(Courtesy of Fr. Tommy Lane who heard it from a homily broadcasted on EWTN on March 18 2002)

All television is educational television. The question is: what is it teaching? ~Nicholas Johnson

Television has proved that people will look at anything rather than each other. ~Ann Landers

I find television to be very educating. Every time somebody turns on the set, I go in the other room and read a book. ~Groucho Marx

Television has changed a child from an irresistible force to an immovable object. ~Author Unknown

The television, that insidious beast, that Medusa which freezes a billion people to stone every night, staring fixedly, that Siren which called and sang and promised so much and gave, after all, so little. ~Ray Bradbury, The Golden Apples of the Sun

Television is an invention that permits you to be entertained in your living room by people you wouldn’t have in your home. ~David Frost

Everything is for the eye these days – TV, Life, Look, the movies. Nothing is just for the mind. The next generation will have eyeballs as big as cantaloupes and no brain at all. ~Fred Allen

Television has done much for psychiatry by spreading information about it, as well as contributing to the need for it. ~Alfred Hitchcock

The smallest bookstore still contains more ideas of worth than have been presented in the entire history of television. ~Andrew Ross

If it weren’t for the fact that the TV set and the refrigerator are so far apart, some of us wouldn’t get any exercise at all. ~Joey Adams

I believe television is going to be the test of the modern world, and that in this new opportunity to see beyond the range of our vision, we shall discover a new and unbearable disturbance of the modern peace, or a saving radiance in the sky. We shall stand or fall by television – of that I am quite sure. ~E.B. White

When television came roaring in after the war (World War II) they did a little school survey asking children which they preferred and why – television or radio. And there was this 7-year-old boy who said he preferred radio “because the pictures were better.” ~Alistair Cooke

A list of quotes and sayings on false accusation, wrong accusation, being wrongly accused and being falsely accused.…
Read More

Archbishop Fulton Sheen’s Quotes and Sayings to Get You Thinking

Excellent collection of quotes and sayings by Archbishop Fulton John Sheen. Right is right if nobody is right,…
Read More

Saint Gianna Beretta Molla was an Italian pediatrician, wife and mother who is best known for refusing both…
Read More

A dog barks when his master is attacked. I would be a coward if I saw that God’s…
Read More
wpDiscuz
0
0
Would love your thoughts, please comment.x
()
x
| Reply